On a cloudy September day, I was cordially invited for afternoon tea at King Ludwig II’s castle.

Well technically, I invited myself weeks in advance. By purchasing a ticket. And sadly, poor Ludwig’s been dead for over 130 years.

His hosts ran a tight schedule in order to accommodate thousands of guests. If you failed to pick up your ticket 90 minutes prior to your tour, it would be canceled.

My journey there didn’t go as planned, despite an early departure. It was two and a half hours by train from Munich to Füssen through the Bavarian countryside. I missed the previous direct route and hopped on the next train, which was over an hour to Buchloe, and change to Füssen.

My arrival in Buchloe was ill-timed. Once again, I barely missed a train, and the next one was in half an hour. That also arrived late. Finally, in Füssen, my last journey was 10 minutes by bus from the station. The bus sat there for another 20 minutes before it finally departed.

The transport gods really wanted to spite me that day. About 2 km outside our destination, my bus got stuck behind a giant parade, marching downhill. Fortunately, the bus driver bailed us off, as walking was our only accessible option.

It was officially past the cut-off time. I had nowhere else to go and needed a backup plan. Should I just visit the castle from the outside? Walk to Austria? The border was a few kilometres away.

I found the ticket office nearly half an hour late and waiting for the moment of truth. I approached the ticket counter with my confirmation in hand, hoping I’d still get in. After all the hassle and late arrival, they let me in!

From the village of Hohenschwangau, I saw a lonely, white Disney-style castle, nestled in the Alps which loomed above. In perfect fairytale fashion, the clouds were ominously low over the mountaintops. I imagined the king once occupying this fortress, distancing himself for his own fantasy world. This palace was his dream, manifested to physical form and isolated from daily mundane affairs.

King Ludwig II’s legacy was synonymous with luxury and extravagance. Since he was crowned King of Bavaria in 1864, he exercised little financial restraint to follow his personal ambitions. Ludwig was entranced by the idea of a holy kingdom full of grandeur and artistic opulence. Thus, Neuschwanstein was one of his biggest architectural endeavours, commissioned and built between 1869 and 1872.

Neuschwanstein was truly a first of its kind, modeled from old Romanesque styles and mixed with medieval imagery and German historicism. Interestingly, the castle’s interior was also fitted with modern technological concepts, notably electricity, heating and plumbing, a stark contrast from the austerity of its exterior.

As the castle came into being, Ludwig increasingly withdrew from Munich, focusing on a new life filled with operas and plays, all performed for him only. Seven weeks after his death in 1886, the castle opened to the public and now hosts a maximum of 6,000 visitors a day. Ludwig’s dream palace made for seclusion is now bringing the world to its doorsteps.

From Hohenschwangau, it was a 20-minute walk uphill to the castle. I entered the forest and followed the path upwards as horse-drawn carriages shuffled past.

I could see the castle’s top turret as I got closer. During my walk, I had put on music for some ambiance. I waited until this moment to play some Chilly Gonzales and drown out the chatter of crowds with the whimsical chimes of his piano.*

I reached near the top of the footpath, catching my breath and feeling a mild burn in my legs. After the trouble getting here, I had 30 minutes to spare before my tour.

The tinkling of piano filled my ears as I circled around the base of the castle.

I noticed Ludwig’s “caretakers” were keeping his home in top shape. Restoration work was underway near the Knight’s House on the south section, with scaffolding covering its base.

My group was called to the entrance at 1:50 p.m. Of course, it wasn’t Ludwig who greeted us, but a tour guide holding audio headsets. I pictured Ludwig’s reaction over hundreds of guests a day trampling through his private quarters, getting up close and personal to his exquisite art collection. I felt a little bit guilty.

Despite a short tour, the inside was quite spectacular, with medieval and religious imagery painted all across the floors, ceiling, and walls. They displayed motifs of love, repentance, and salvation with images of knights and poets populating the walls. With audio sets on, the guide directed us through the servants’ and administrative quarters on the lower level, then to the king’s staterooms on the upper floors.

One of the biggest rooms, the Throne Room, truly exemplified his fixation on medieval lore, especially the Holy Grail. The real story, no Monty Python references here. The rectangular-shaped room is bordered on either side by blue pillars with the sunlight shining on the golden walls. Ludwig intended for this to be the Hall of the Holy Grail, a reincarnation of his obsession with purity and freedom from sin.

The upper level opened up to an exterior balcony facing the Alps with the river Pöllat running through. Being mid-September, the trees were already beginning to change colour. Meanwhile, I put myself in Ludwig’s shoes (or boots), standing where I stood, watching the river and the trees bloom, still and introspective. Removed entirely from the turbulent affairs of his country and the rest of Europe.

Behind the castle, low clouds enveloped the peaks and cliffside. 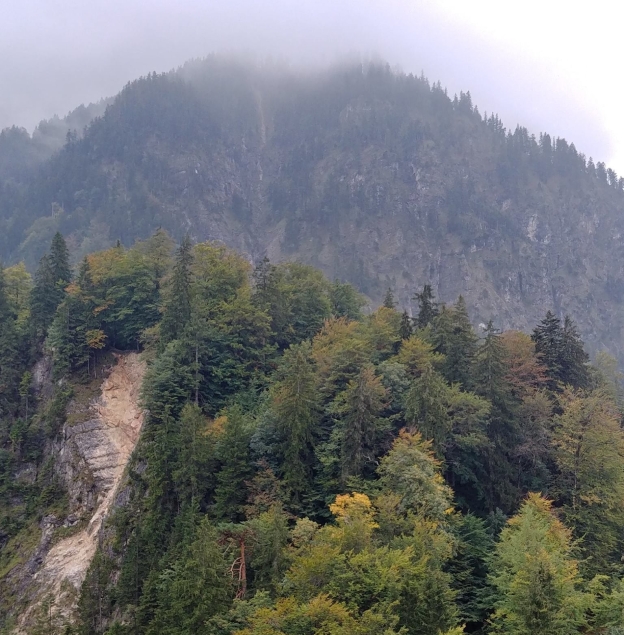 As the tour concluded, I stopped at the gift shop and purchased a fridge magnet. For every trip, I always needed that one cheesy souvenir.

My visit with King Ludwig had come to a close. I bid good-bye and started my trek downhill. On the way, I stopped for an exceptional view of the landscape facing north.

During my last two hours, I took the bus back to Füssen to explore and eat some ice cream before hopping on a train to Munich. By then, Neuschwanstein has disappeared, retreating to the mountains just as the aloof king once did.

Admittedly, Neuschwanstein was a little outside of my taste when it comes to travel. I love tourist attractions – don’t get me wrong – but when abroad, I strive to embody the explorer or wanderer rather than a tourist. Well today, I was certainly a tourist.

To some, the castle could be considered your typical run-of-the-mill tourist trap and not worth the money and time. I certainly had some reservations myself, especially throughout my travel snafus.

But to me, Neuschwanstein was anything but inauthentic. If you look past the touristyness, here’s a place both ahead of and past its time. A place brought to life by a man conflicted with the burdens of everyday life, who felt disconnected from society. Thus, he found purpose through an alternate reality, shaped by his imagination.

Both the castle and its grandiose symbols of medieval fantasy demonstrate a paradox: As Ludwig’s world grew bigger, the outside world began to shrink around him – every single day. And now, this once reclusive place opens its doors to outsiders from all around the globe.

I bet Ludwig wouldn’t be too happy about that.

*For some music to chip away your writer’s block, take a listen to some Chilly Gonzales

Historical info about the castle and Ludwig was from their website. Click here for more background information.

View all posts by Kelsea McKenna

A beautiful little waterfall in Prince Edward County! And it’s best to see it quick before it possibly dries up by June!
I somehow hadn’t realize that I haven’t posted here in months! Although I’ve still been making some excellent content, it’s all so school focused and not quite related to the stuff I post here. But now I finally went on a small trip up and above!
Some shots of Toronto’s ridiculous snowstorm yesterday plus a bonus string light shot in black and white! Crazy how the snow nearly reached the top of my garden box, now just poking out of the ground.
A late pre-Christmas December photo dump of my weekend in Prince Edward County!
Straying a bit from my travel/local Toronto content to share my very first Premiere Pro video! It’s a short doc about my friend and musician @claude.lavender and his creative process! Despite the challenges of dark but cool ambient lighting, everything went well overall! Hopefully this will translate to good grades 🤞.
First snowfall + Lightroom practice = a photographer’s winter wonderland! Not only still learning Lightroom but also trying out their new masking features. Trying to practice some non-destructive editing which is something my instructors have emphasized throughout my course. Photoshop is always the trickiest, but the point is to always add stuff when adjusting that’ll make it easy to remove.
Loading Comments...
%d bloggers like this: