One year ago today I had my birthday party in a bone church.

Skulls and skeletal remains lay strewn about in every direction. Arranged in pyramids, or strung up high on the ceiling, it felt as though an army of departed souls was watching me closely. I raised my phone to take pictures of this macabre place. One might think that I was in a tomb, a mausoleum or a haunted house. But it was just a church.

It was mid-afternoon and a warm, sunny day in Kutná Hora, a small Czech town, roughly two hours east of Prague. I was over one week into my second European solo trek, after spending seven nights in Germany and then a five-hour train through the Czech countryside. Before jetting off,  I browsed Atlas Obscura to find some peculiar places to visit. A popular recommendation was the Sedlec Ossuary, also known as the Bone Church.  And the day I set out to find this church, it happened to be my 26th birthday.

My hostel in Prague hosted daily treks and activities for their guests around the city and its outskirts. This day was a trip to the Ossuary in Kutná Hora, followed by a traditional Czech lunch in the centre of town. While nursing a minor hangover from the previous night, I returned to the hostel foyer after grabbing a quick breakfast from Costa to meet my crew. It was only five of us – myself, our guide, and three Australians. According to our guide, the trip would take at least an hour by train from Prague Central station, which was only a 15-minute walk from here. We left around 10 am.

When we arrived at the station, our guide began searching for the right ticket booth, asking every station attendant in sight. There were separate kiosks for different kinds of passes- airport express, regional trains or public transport. For a solid half-hour, we followed our confused tour guide like cattle, occasionally lining up only to find out we had to go elsewhere. She had only sparingly visited the train station herself. Yet she was in charge of navigating through the far outskirts of town. Needless to say, we were slightly concerned.

At long last, we found the right place. But the next direct train wasn’t for another two hours, so we booked tickets for an earlier time where we would change trains. Nevertheless, we still had a full hour to kill, so we huddled in a corner shop eating croissants and drinking coffee. Considering the manner in which our trip is panning out, I bought two croissants to be safe. This whole time, I still hadn’t told anyone about my birthday.

Around noon, we finally boarded the first train, which was an hour ride to the town of Kolin to catch the transfer. During the ride, the Aussies were already apprehensive about our so-called tour guide’s lack of direction as she sat a few rows down with her earphones in.

We arrived in Kolin, but instantly hustled over to make our connecting train, which would depart in about eight minutes. Lucky for us, departure times aren’t strictly adhered to, and the train left a couple of minutes late. Unlike the last ride, we were seated in a compartment similar to the Hogwarts Express. There were benches facing one another with a narrow hallway to our left.

The weather was still warm and stuffy, so we cracked open the window to allow a warm breeze billow inside and listen to the wheels grazing the tracks. Through the intertwining cables overhead I stared at flat grasslands of green and yellow and a cluster of white houses with red-roofs huddled together. When we arrived at our destination, it felt like our journey was over – but it had still only just begun.

As we left the station, our guide had to calculate the route to the Ossuary on Google Maps. Fortunately, it was only a 15 minute walk from the station. Even if we still got lost, there were enough tourists around us, all headed to the same destination. There wasn’t much to see during our walk since the epicenter was at least another two kilometres from the Ossuary. Other than visitors and a few locals, the town was fairly sparse. Kutná Hora was known historically for its silver mining since the medieval period, and its legacy was still connected to the industrial landscape. But instead of seeing mine pits, we instantly noticed the pungent smell of tobacco filling the air. We noticed that it likely came from the Philip Morris facility sitting right beside the highway.

After three hours of waiting, confusion and running to catch trains, our pilgrimage was complete and found the Ossuary. Its exterior was just a small, ordinary gothic church with grey stone and narrow, arched windows along the sides, perched above a crowded cemetery.  It didn’t take long before we bought our tickets, prepared to interact with spirits of the dead.

However, inside was a different ballpark. It was like a scene from Indiana Jones, or a documentary series about creepy urban legends. No matter where you turned, a skull was looking straight at you, or a skeletal hand waving hello. Femurs were strung together on the walls and the ceiling. I was instantly greeted by skeletal pillars, running vertically up both wall corners. At the end was a giant chandelier (which apparently consists of one of every human bone), an altar and a Catholic crucifix, with two tiny corridors on either side. A giant “osteo” coat of arms also hung from the top, with bone pyramids over five-feet tall, bone garlands and even a signature on the wall “written” with bones. The most macabre display was a series of tiny “exhibits” behind a grate on either side of the church consisting of skull mounds, piled up over ten feet high. Some had a navel- shaped opening in the middle like a tunnel with a light at the end. It reminded me of a Lord of the Rings extended scene when Aragorn, Legolas and Gimli encounter the Army of the Dead, and later get buried in an avalanche of skulls. 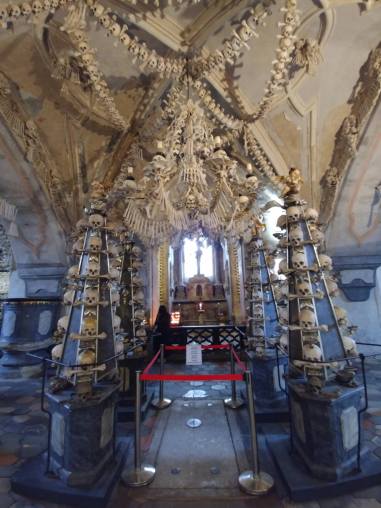 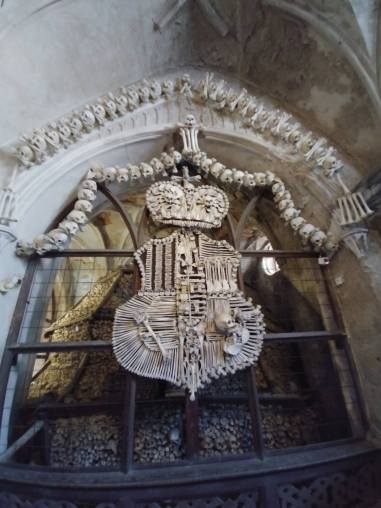 So how did such a grotesque skeletal spectacle even happen?

In the mid 13th century, Henry, the Cistercian abbot in Sedlec was sent to the Holy Land by the King of Bohemia. He then returned with a bit of “Holy Soil” from Golgotha, where Jesus was crucified. As word spread, the church and its cemetery became prime real estate for the deceased and their remains. By the 15th century, this church had so many skeletons hiding in its closet that an ossuary was built underneath to house the discoveries from mass graves. A great number of bones remained underground, until 1870 when a woodcarver and artist named František Rint was appointed to re-arrange them – hence the cadaverous result before my very eyes. According to the Ossuary’s guide, there’s at least a total of 40,000 to 70,000 bones in this church.

And in case you morbid minded couples were wondering – no sadly, you cannot marry in the Ossuary. We fact-checked this on Google previously.

When we left the church, it was already mid-afternoon. We were behind schedule and forgot about our Czech lunch (or soon to be dinner), which would have been another two to three-kilometre walk. My Aussie friends were inkling for a beer, so they picked some up at the corner store and popped them open on the street as we waited for a bus. After waiting 40 minutes and emptying the bottles, nothing showed up. Thus, we unanimously agreed to forego our Czech meal and head back. Our return journey by train was the same as before – including the five-minute dash to catch our connection back to Prague. Most of us slept the entire way back, heads slumped on the chair – feeling much like Sedlec’s decayed dwellers.

At first, I worried if this trip was worth it – an hours-long trek to a tiny church in which we spent roughly 20 minutes, and turned right back. But then I thought, how many people can say that they celebrated their birthday in a Bone Church? If you cannot wed there, then there’s always a birthday – or “deathday” as the occasion seems fitting. Despite its spookiness, the Ossuary’s allure makes complete sense from a tourist’s perspective. It entices the ghost stories, urban legends buffs and all places associated with death and afterlife. And there’s a fairly large population of them.

Imagine back in 1870, when hundreds of skeletal remains were transformed into this work of art, and the dumbfounded reception that likely followed. Was this considered sacrilegious? Or a grotesque blending of religious iconography and turn-of-the-century modernism? Regardless, it’s probable that thousands of local parishioners still fulfilled their dying wishes.

We got back to Prague at around 6 pm and parted ways with our tour guide. I had the option of joining my fellow travelers for an actual Czech dinner (instead of lunch) and drinks by the river. But longing for my solo backpacker time, I decided to walk about on my own before sunset. I also wanted some birthday cake.

To celebrate a date of birth in a place filled with death is a strange paradox.  Did it force me to address my eventual mortality? A little bit more than usual, because let’s face it: with each passing birthday, you know what happens at the end of the line. The Ossuary was my final destination that day but was indefinitely one for many others.

On a lighter note, I concluded this unusual birthday experience with a scrumptious slice of chocolate cake that only cost me four dollars. I’m only 26 after all, and I intend to retain my youthfulness with every bone in my body.

View all posts by Kelsea McKenna